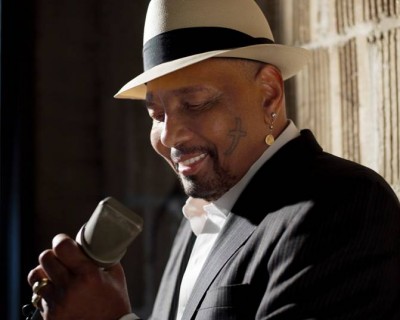 Iconic soul/R&B vocalist Aaron Neville has announced a January 22, 2013 release date for My True Story, his debut for EMI’s Blue Note Records. The record, produced by Keith Richards and Blue Note Records President Don Was, finds Neville revitalizing some of his favorite songs from the doo-wop era and beyond. Watch a video about the making of My True Story with footage from the recording studio and interviews with Neville, Richards, and Was.

“Aaron Neville is one of the most expressive and soulful artists of all time, it’s such a thrill to hear him sing,” Was says. “His vocals have a way of reaching into your heart and stirring something really deep inside. It’s a huge honor to welcome him to Blue Note Records and to be involved, along with the legendary Keith Richards, in the production of this album.”

All of the tracks were hand-picked by Neville himself as they are songs that have remained close to his heart since he was a child. “When I was a kid, doo-wop was like medicine to me,” Neville explains. “I didn’t care what else was goin’ on in the world as long as I could sing along with Pookie Hudson and The Spaniels, The Flamingos, The Clovers, Sonny Til and The Orioles, Clyde McPhatter—I was like a kid in a candy store.”

A stellar group of session players was assembled to lay down these tracks. In addition to Keith Richards on guitar other musicians include:Greg Leisz on guitar (Beck, Sheryl Crow, Bob Dylan, Ryan Adams), Benmont Tench on organ (founding member of Tom Petty and the Heartbreakers), George G. Receli on drums (Bob Dylan, James Brown), and Tony Scherr on bass (Bill Frisell, Norah Jones, Rufus Wainwright). Richards sheds some light on the atmosphere in the studio as he explains, “This was a dream session. The band fell right into the groove and Aaron sang like an angel. It was an honor!”

During Neville’s five decade recording career, he has displayed a chameleon-like ability to perform, collaborate and contribute to a wide range of genres. From the funky soul and R&B cuts with the Neville Brothers to a triple platinum, Grammy winning duet with Linda Ronstadt in 1989, “Don’t Know Much” (off an album the duo received two Grammys for), to the title track of 1993’s The Grand Tourwhich put Neville on the Country charts for the first time, to his several Gospel records including his most recent project, I Know I’ve Been Changed in 2010.

The track listing for My True Story is as follows: