For Billy Talent, the period following the release of their fourth album, Dead Silence, in 2012 was one of celebration. The momentum generated by that album’s string of Top 10 Juno Award–nominated singles carried through to the 10th-anniversary festivities for the band’s 2003 debut, which was performed in its entirety in a series of special retrospective performances in 2013. The band’s decade of alt-rock radio dominance was further enshrined with the release of the Hits compilation, which charted Billy Talent’s journey from hungry, scrappy, rec-centre punks to international festival headliners. Following this victory lap, the band could approach sessions for their fifth album from a position of strength, emboldened by all they’ve accomplished and eager to embark upon the next phase of their career.

But as frontman Ben Kowalewicz tells it, when Billy Talent entered the studio in the first week of January 2016, something didn’t feel right. “We started two days after New Year’s,” he recounts, “but as much as you think that would be a cathartic, fresh-slate kind of move, I found the beginning of the year really strange in a cosmic kind of way. It was almost palpable how intense it was.”

Sure, recording in their hometown of Toronto in the dead of winter probably didn’t help the mood, but as the sessions commenced, the unexplained uneasiness that Kowalewicz was feeling started to manifest itself in news headlines. Bowie dead. The Brussels bombings. And, of course, there’s the ever-unshakeable sense that our planet could be heading toward an extinction event during our lifetime.

But on top of grappling with this existential dread, Billy Talent were dealing with a seismic shock that hit much closer to home. On January 15, drummer Aaron Solowoniuk took to the band’s YouTube channel to explain that he would not be playing on Billy Talent’s new album. The multiple sclerosis he’d been battling since the late ’90s—and which he’d successfully kept in check through ongoing treatments—had come back with a vengeance, and he was just too weak to get behind the kit. For this record, he would serve as a production advisor and in-studio documentarian.

This would be a significant setback for any band, but it was especially devastating for Billy Talent, the rare group that have kept their original line-up intact for over 20 years (dating back to their ’90s-era incarnation as alt-rockers Pezz). Kowalewicz, Solowoniuk, guitarist Ian D’Sa, and bassist Jonathan Gallant have been best buds since childhood—losing Aaron was like losing a limb.

“It was one of the hardest things we’ve had to deal with as a band,” says D’Sa, who’s also the band’s chief songwriter and producer. “To think of what he has to do when he goes onstage every night, it’s insane, for a guy living with MS. And for the past 15 years or so, he’s trucked through that and beat it. But I guess we all knew that one day it could relapse, and it just happened right before we were going into the studio.”

“It was a dagger to the heart,” Kowalewicz says. “And the unfortunate thing about this type of disease is Aaron said, ‘I don’t know if I’m going to be better in six months, six weeks, or six years. And I can’t also be road-blocking you guys from doing what you have to do.’ It was a really introspective time for all of us. There was a lot of conversations and tears. Finally, we just said, ‘Okay, we’re going to move forward.’”

While such scenarios usually result in a mad scramble to find the best session drummer available, Billy Talent knew they couldn’t just recruit some random stickman-for-hire to replace the heart and soul of their band. Like any transplant surgery, you need a donor that shares the same blood type. When it came time to draft up a list of potential candidates, there was only one name on it: Jordan Hastings of post-hardcore heroes Alexisonfire, a band that cut its teeth in the same Southern Ontario circuit as Billy Talent.

“At first, it was odd not having Aaron there,” Kowalewicz admits. “But then I realized: I can hear the struggle in the songs… it jumps off the record to me.”

And that tension is baked right into the title of the record: Afraid of Heights. “It’s a metaphor for a fear of commitment,” D’Sa explains, a sentiment that, appropriately enough, is reflected in the two dramatically different versions of the title track that bookend the record. The first is a hard-charging power-pop track in signature Billy Talent style, the other a brooding, dubbed-out, piano-driven take. (Says D’Sa: “We were having a hard time deciding between which one of the two to put on the record, so I was just like, ‘Fuck it, why don’t we do both?’ Like they used to do in the ’80s, when they called it a ‘reprise!’”)

But if Afraid of Heights’ lyrics are born of worry and uncertainty, musically, the album represents Billy Talent’s boldest, most confident statement to date. The process of compiling Hits reconnected the band with the white-hot intensiy of their earliest efforts, and you can hear that formative ferocity re-stoked on the aforementioned “Ghost Ship of Cannibal Rats,” with its brawny, “River Below”-sized groove and classic shout-and-response interplay between Kowalewicz and D’Sa. At the same time, the band is pushing the boundaries of their sound further than ever before: the synth-textured “Horses and Chariots” indulges D’Sa’s deep-seated love of Depeche Mode (“the guys started calling me Ian D’Synth,” he jokes), while Kowalewicz proudly describes the slow-building, six-minute epic “Rabbit Down the Hole” as “our version of ‘November Rain’ or ‘The Unforgiven.’”

Says D’Sa, “Every time we put out a record, a lot of older fans are like, ‘I wish they would make another record that sounds like the first one!’ But we’re more in the headspace of not recreating what we’ve done already. There’s a lot of things on this record I’ve never tried before: I programmed synths, there’s a lot of piano stuff, there’s acoustic guitar. It’s our most experimental record yet.”

But that experimentation shouldn’t be interpreted as Billy Talent severing ties with its punk roots—rather, the album’s adventurous ethos and socially conscious lyricism serve to reaffirm rock ‘n’ roll’s transformative potential and provocative power at a time when the music’s pop-cultural currency has diminished. And no track better embodies this idea than the CBGB ’77-style rave-up “Louder Than the DJ”, which is not the anti-EDM rant its title may suggest (as D’Sa quips, “some of my friends are DJs!”), but a reminder of rock’s crucial historical role as a revolutionary force.

“Rock music is what changed all of our lives,” Kowalewicz says. “And that song is about telling people how beautiful and how special of an art form it is. We need to nurture it and inspire the next generation of kids to pick up guitars, bass and drums—because hopefully the music will affect them the same way it affected us, and they’ll pay it forward, too.”

With Afraid of Heights, Billy Talent give them every reason to take the leap. 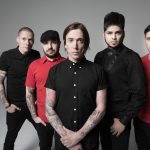 Congratulations to Billy Talent on these Juno Award Nominations that were announced this morning in Canada: • Group Of The Year • Rock Album Of The Year • Producer Of…

We’re so close! Crisis of Faith is out on January 21st! If you haven’t already, be sure to pre-order it now.… https://t.co/3aGw9ZLLVJ

https://t.co/zrOxTvfd01   Whether you’ve been with us form the start, or are just getting to know us now, we’re sur… https://t.co/ulKxVqBikW