I meet Julie Edwards and Lindsey Troy of Los Angeles garage-blues duo Deap Vally at a bourgeois Mexican restaurant in Silverlake to talk about their much-anticipated sophomore release Femejism. As soon as we sit down and order drinks, Edwards, who recently became a mother, is looking around the candlelit patio stuffed with working professionals and millennial couples staring at their iPhones. A Los Angeles native, Edwards is shaking her head. This place is not what it used to be. But what part of Silverlake is? When the food arrives, Edwards notes the pomegranate seeds on top of the guacamole. “These are [the restaurant’s] apology,” she jokes. “For turning into what it did.” It’s been three years since Deap Vally’s debut album, Sistrionix, saw them climb to celebrity heights almost overnight. Most diehard fans know the story: Edwards, who is seven years older than Troy, met in 2011 when Troy walked into The Little Knittery, a knitting shop in Atwater Village that Edwards once owned and ran classes out of. Troy was curious about learning how to crochet. She and Edwards hit it off immediately. Edwards had been drumming in another two-piece called The Pity Party, while Troy, who spent her teenage years in the pop industry chasing a career at the behest of her parents, had taken a step back from music. She gave Edwards a demo she had made years back and the two decided they wanted to play together.

At their first gig, an A&R person from Universal happened to be in the crowd. She fell in love with Deap Vally and advised them on their way to stardom. They went to England and sold out all their shows, stunned to see their faces on huge billboards. The press loved them, especially overseas. Not only were Deap Vally a refreshing blast of gritty garage blues, but they were charming, fashionable and an excellent live show. Edwards plays her drums with her entire body, while Troy’s voice embodies the strength and dexterity of Janis Joplin. Deap Vally played huge festivals like Coachella and Reading in Leeds. Eventually, they signed to a major label, Island Records, to release their debut.

“I knew the dangers of being on a major label,” explains Troy, who was no stranger to the greasy pitfalls of the music industry. “I guess I thought that because I was older, wiser, and in a different type of band with great management, that it would be a different a situation. Being on a major label means you are in business with a major corporation. It was a constant fight for us. It was exhausting. For example, the label wanted us to co-write with some people to make bigger hits [for Sistrionix] and neither of us wanted to do that. The message of our music is about self-empowerment. And that is when the relationship started to take a turn.”

Regardless, Sistrionix was well-received and fans went crazy for Deap Vally’s empowering feminist anthems about career, love, age, beauty and everything in-between. “Gonna Make My Own Money” became an instant hit, while the cheeky pro-sex anthem “Walk of Shame” was screamed along to by sweaty fans at every show. The lyrics were simple, direct and effective (Troy’s motto has always been that there are many things to write songs about besides love.) Despite the struggles with the business and their label, Deap Vally managed to gather fans all over the world and a loyal following. They were developing a distinctive aesthetic: matching body suits in wild patterns and colors, short-shorts, tons of fringe and most importantly, no shoes.

“Early on, when we were discussing what to wear on stage, no shoes seemed like a great way to simplify the equation,” explains Troy. “We also would never be made to be less mobile. I also don’t have the greatest balance in the world. I can stand on the drums. I can run around. I have my footing. If I was in shoes, I would fall.”

“Shoes undermine the woman. Therefore, they must go,” adds Edwards flatly. “Heels get in the way of me being able to rule. I have never played drums in shoes. I see it as a big handicap.”

With the help of up and coming L.A. designers, Allysun Maria Dutra and Michelle Rose, Deap Vally quickly saw the benefits of custom-made stage gear and flashy outfits that paid more homage to figure skating leotards than Saint Laurent. “It was part of our self-awareness as a band,” remembers Troy. “We never wanted to be the neighborhood hipster band. We wanted to do something loud, bold and brave.” 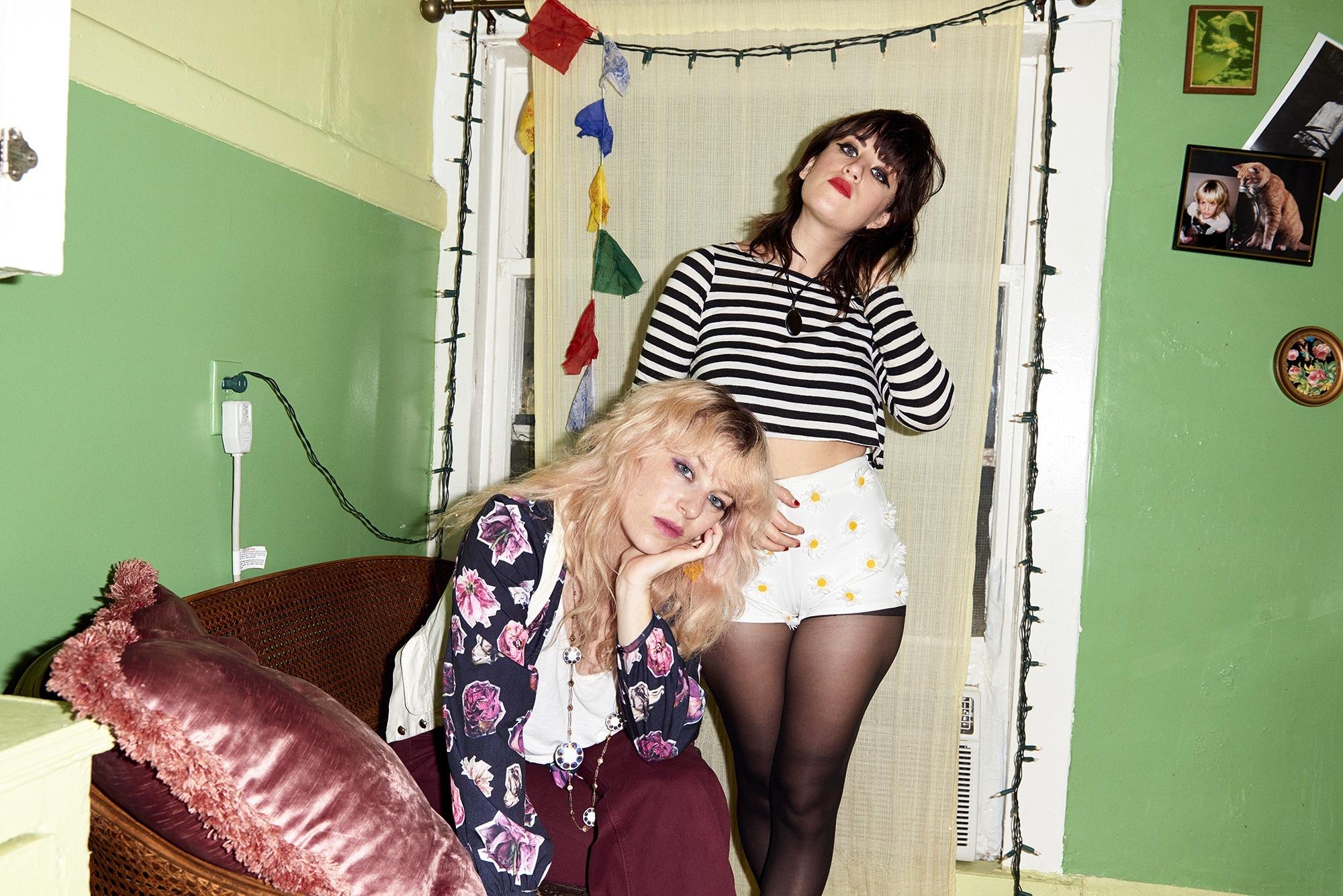 After some time off, they started writing their sophomore record with no label to call home. They didn’t care. After years of touring and press, they had a lot to say and it was time to put it to music. They linked up with Yeah Yeah Yeah’s guitarist Nick Zinner to help produce the record and went in and out of the studio for almost two years. The debuted the first single “Royal Jelly” last year with a music video featuring model and friend Georgia May Jagger. In the meantime, they signed with Cooking Vinyl in Australia and Nevado Music for North America, a boutique label with a fondness and respect for the band.

“There’s no bureaucracy,” says Edwards. “It’s nice to be able to email the head of our label and ask for something and get a straight answer.”

Earlier this month, Deap Vally announced their sophomore album, Femejism, to the world with the “fuck-you” single, “Smile More“. Fans and critics started buzzing. “I did not make up the term ‘femejism,'” says Edwards of the usual title. “I received it. I channeled it.” (Deap Vally loves word play — the original name for their band was God’s Cuntry. ) “The Google Search needs to yield a statistically impossible amount of results. If you search for Sistrionix on Google, you only get one search result. It almost impossible to find something that has only one search result. I searched Femejism and it has two results. Two!”

“It wasn’t savvy,” Edwards protests. “It was mystical. In this world of over-information, just so much shit. What can you find that is rare?”

Femejism is heavy, catchy and dynamic, but still very Deap Vally at its core. While lyrical themes may not have strayed too far from the previous release, they have developed a certain self-awareness of themselves as a band that was not present in the greener days. Songs sarcastically nod at the ridiculous demands of the music industry, the frustration they felt at the beginning of their career, as well as more inclusive topics such as beauty and age.

“You can’t prepare for press and reviews,” says Edwards when I ask her about the pressure of the sophomore follow-up. “However, we have always been very well-received. Critically, we have not taken a beating yet.”

“We have such an assortment of fans,” Troy says. “Some relate to the lyrics a lot, while others just enjoy the blues rock sound we do, or there are fans who relate because we are women, so they all have different reasons.”

“If people don’t get it, they might be a dumb fuck. That would probably read really mean,” Edwards can’t even stop herself as the words come out. “I think we made a slightly adventurous, courageous record, which is what we wanted it to be. That is our reward. Obviously, it’s easier in life if everyone is happy and likes it, but we made the record we wanted to make. We got to go into all the room of the house we were scared to go into last album.”

Since 2013, Edwards and Troy have grown as a band, changed as people, and switched hair colors about a dozen times. Edwards got married and had a baby girl, while Troy stopped her vagabond ways and actually unpacked her suitcase into an apartment she shares with her boyfriend. They both moonlit as bass players in other bands, JJUUJUU and my band, White Lung. Deap Vally hit the road again with Peaches and then, Wolfmother. Now, they just have to think about the release of Femejism.

“I think we are so lucky we be releasing something that anyone is even going to review,” says Troy, while Edwards nods in agreement. “I know this album is good, though. I am proud. I don’t care.”