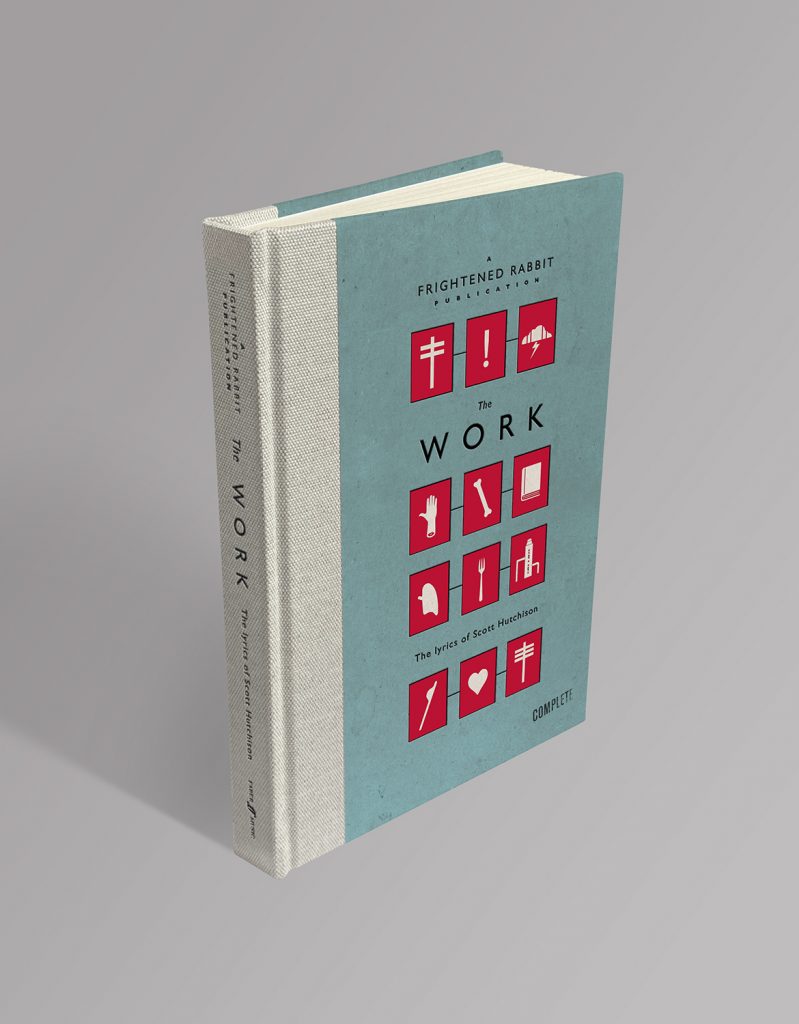 Frightened Rabbit are releasing The Work, a book of lyrics and illustrations by the late Scott Hutchison, lyricist, vocalist and songwriter of Frightened Rabbit, due for release in the UK on 17 November 2021, published by Faber Music. The book will be released in the USA / internationally on 13th January 2022.

The limited hardback edition presents the band’s complete lyrics (including B-sides and rarities) with handwritten excerpts by Scott, alongside his illustrations, many of which have never been seen before.

The book is meant both as a celebration of and tribute to Scott’s unbridled creativity. It aims to fulfil his wishes by being the book that he wanted to create and had spoken of creating before his death.

Grant Hutchison (Scott’s brother and drummer of Frightened Rabbit) had to say:

“Seeing this book come to life has been something of a bittersweet experience. Reading the lyrics without music really brings home the stark reality of what Scott was going through and at the same time highlights the talent of someone who I consider to be one of the best songwriters in the world. This would’ve been a different release had Scott been involved but we all felt it was important that his lyrics be celebrated and given the spotlight they deserve. As Scott has said these words were always meant to be accompanied by music but the impact of digesting them without is no less great. Pick up this book of words, hold it, share it and immerse yourself in the world Scott created by opening not only his heart but his whole soul to the world. “

The Work’s creative concept comes from renowned album designer Dave Thomas, who worked with Frightened Rabbit across their career.

The Work will be available as a limited edition to purchase from Frightened Rabbit (www.frightenedrabbit.com) and other retailers.

Formed in Selkirk, Scotland in 2003, Frightened Rabbit were named after Scott’s nickname attributed by his mother due to him being a nervous child. Originally starting as a solo project, the band expanded to include Scott’s brother Grant, alongside members Billy Kennedy, Andy Monaghan and Simon Liddell. Though originally self-released, their debut album Sing The Greys earned the band a deal with indie label Fat Cat Records, who re-released the album and the two that followed: 2008’s Midnight Organ Fight and 2010’s The Winter of Mixed Drinks. 2013’s Pedestrian Verse, marked their Canvasback / Atlantic Records debut, and was followed by 2016’s Painting Of A Panic Attack. Scott Hutchison took his own life in May 2018. Through his music and art Scott made tiny changes that had a big impact; his honesty and openness about his own mental health inspired people from all walks of life.

Scott was the subject of a recent release “Hutch” by Aaaron Dessner (The National) and Justin Vernon’s (Bon Iver) project Big Red Machine and was also recently honoured by Coldplay as the subject of their track “Champion of the World” which sampled a song “Los Angeles Be Kind” by Scott’s project Owl John.

In Scott’s memory, his bandmates & family set up the charity Tiny Changes to find and fund inventive ways to improve mental health support for young people in his native Scotland. Find out more here – https://tinychanges.com/