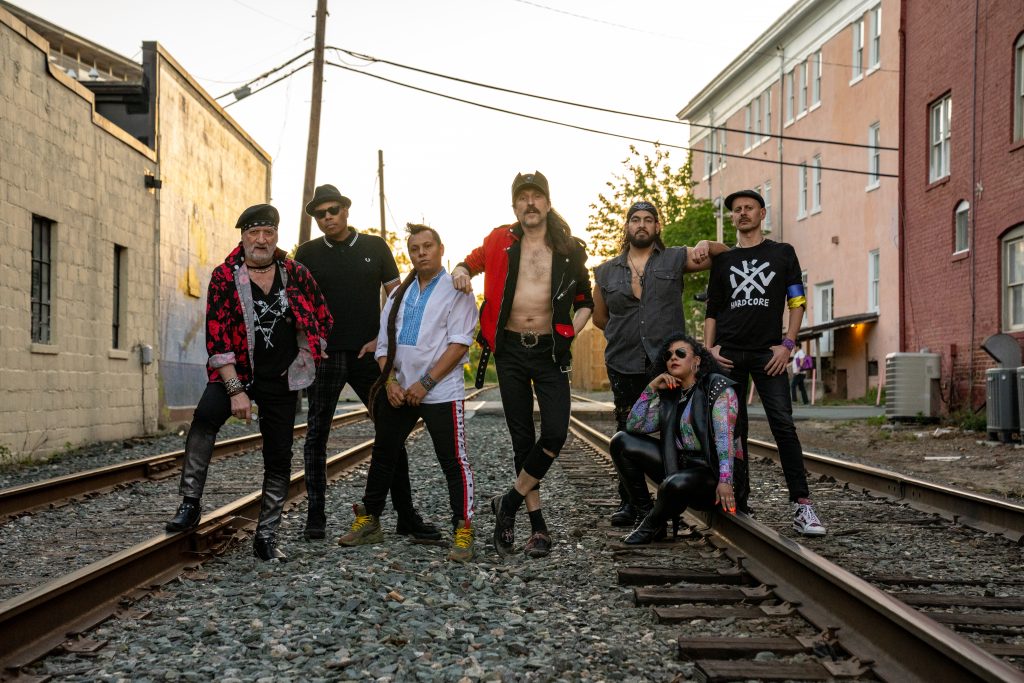 “This is music of survival and perseverance. That’s always been our main driving force,” declares GOGOL BORDELLO frontman Eugene Hutz about their new album SOLIDARITINE (release date: September 16, 2022 via Casa Gogol/Cooking Vinyl).  “We just want to give the world a timeless album with messages of human potential and power.”  Their eighth full-length album is inspired by survival in the face of adversity – a theme that can be applied to the pandemic just as much as it can be applied to the war going on in his native Ukraine.

“Our music was always about perseverance,” exclaims Eugene. “Rock ‘n’ roll comes out of a real place. Take a group of people who have endured immigrant traumas and dislocation. They create music, get successful together, become more baroque and experimental, and experience some years of relative calm. All of a sudden, humankind encounters these problems like the pandemic and the war. This is when rock ‘n’ roll is the most necessary and where we perform the best.”

The seven piece of mixed heritage from locations such as Ukraine, Ecuador, and Russia have consistently riled up audiences with an inimitable patchwork of punk, gypsy, dub, folk, Latin swing, and Eastern European magic. With the more hardcore leanings of SOLIDARITINE, the sense of urgency and a fresh bolt of energy returns the band to their incendiary beginnings while keeping their agit prop leanings front and center.  Tapping New York underground icon Walter Schreifels (Gorilla Biscuits, Rival Schools, Quicksand) for the producer seat, Gogol dove deep into the studio and emerged with a album rife with the insurgent sound of survival.  “The album is really about uniting the people of goodwill,” he reveals. “Releasing any kind of art that doesn’t address the situation in Ukraine right now would be pretty despicable.”

Dusting off a handful of the punkier tracks that were originally recorded for their last album Seekers & Finders, Eugene and crew recorded 13 tracks of unbridled energy. The opening track “Shot of Solidaritine” kicks off acoustically before

launching into a raucous sprint at a breakneck pace. Gogol takes the post-hardcore classic “Blueprint” by Fugazi and injects their trademark Eastern European stomp. H.R. of Bad Brains guested on “The Era of the End of Eras,” blessing the track with a cameo punctuated by a key moment from the Bad Brains anthem “Sailin’ On.” He smiles, “Walter and I were in tears when H.R. sent it in.”  Their new single “Focus Coin” embraces the punk spirit that fueled Eugene’s creativity streak throughout SOLIDARITINE which Eugene explains, “The quality of your ability to focus defines everything in your life and that’s exactly what the first single, ‘Focus Coin’ is about. Your focus is the hardest currency there is.”

“Forces of Victory” which features award-winning Ukrainian poet and novelist Serhiy Zhadan and electrofolk band Kazka, explodes with dizzying acoustic guitars and violin, charging forward at lightspeed before crashing into an uplifting verse kickstarted by fits of electric guitar. “It’s a very extreme hardcore number, but here’s the mystical part of it,” he observes. “It originally appeared on Super Taranta! [Gogol Bordello’s classic 4th studio album] When we recorded the first version of it, a lot of things were unintentionally empty. Entire chunks of the song are instrumental. This year, the words came to me in like five seconds for those parts, and they were distinctly about dignity, integrity, and resilience. The righteous cause of Ukraine is undeniable.”

Formed in 1999, Gogol Bordello took their style of Eastern European-influenced gypsy punk and doused it deep into the underground rock of New York City. Imminently beginning a U.S. tour (tour dates below), Gogol Bordello have been praised for their recorded material but especially heaped with accolades about their live shows. Wall Street Journal raved about the band’s live performance saying, “Gogol Bordello mashed punk energy with Eastern European modes for a set that received the wildest reception of any show I saw,” while Los Angeles Times said, “Gogol Bordello celebrates sensuality in both words and raucous, joyful internationalist dance rock.” Pitchfork proclaimed, “Eugene Hutz and his acoustic guitar slapping (think Les Claypool’s hands, but on a six-string) and waving arms summoned the crowd which quadrupled in size by the set’s fourth song. Festival goers were literally running toward the stage” while Consequence hailed “the ever-evolving collective has defied the boundaries of continents and genres in their quest for spiritual illumination through gypsy punk.”

“I started playing punk rock as a kid. So, I was going back to it,” Eugene adds about the overall explosiveness of the new album.  “I realized music was a really great way to levitate above all of these trials of life.”

Gogol Bordello will be hitting the road in support of SOLIDARITINE this Fall in North America with the tour kicking off at Pittsburgh’s Mr. Smalls Theatre on October 20th and heading West to Seattle’s Neptune Theatre on Nov. 14th.  Tickets go on sale to the general public on Friday, July 22nd with presales beginning Wednesday, July 20th (artist presale) and Thursday, July 21st (local presale) at 10:00am Local Time.