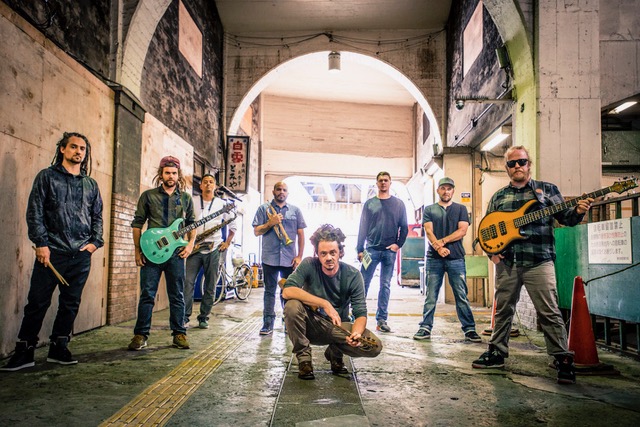 SOJA Has Announced A National Amphitheater Tour With Dirty Heads; Scroll Down For The Summer Tour Dates “Charismatic bandleader Jacob Hemphill writes SOJA’s lyrics as an attempt to find a path to unity in the world.” – NPR

“Over the course of their near-20-year career, SOJA has amassed a loyal following for their social justice-minded brand of roots reggae.” – USA Today

“The transcendental appeal of SOJA has as much to do with their simply and traditionally constructed reggae tunes as it does with their universally appealing messages of hope and peace.” – Relix

SOJA, the internationally acclaimed eight-piece from Washington D.C., have won their first career GRAMMY® in the “Best Reggae Album” category for their seventh studio album Beauty In The Silence.

Fueled by the sheer force of the band’s connection and chemistry, Beauty in the Silencemakes for a much-needed antidote to fractured times, infusing so much warmth and wisdom and unstoppable joy into each and every track. Like 2014’s acclaimed Amid the Noise and Haste (also a GRAMMY® nominee for Best Reggae Album), the title to Beauty In The Silence references the opening lines of Max Ehrmann’s beloved poem “Desiderata” : Go placidly amid the noise and haste and remember what peace there may be in silence. “My dad had that poem memorized, and before I’d go out on tour he’d sort of whisper it in my ear,” said Hemphill. “To me it’s a reminder of what we lose when we get caught up in the distractions all around us. You get so used to life being loud and fast and goal-oriented, but then you go out in nature and hear the silence and realize, ‘Damn, I got tricked.’ Life doesn’t have to be all go, go, go. The real key to life is in being still.”

“I really love that this record is a mix of all of us together in a room and all of us far apart,” said Hemphill. “It’s something that I’d love to keep doing in the future: let’s get together, let’s get the vibe and the groove, and then let’s go off into our own worlds and discover what’s there.” SOJA deepens that communal spirit by collaborating with some of the biggest names from all corners of the reggae world including: Ali C of UB40, Slightly Stoopid, Rebelution, Stick Figure, J Boog, Collie Buddz, Eli Mac, Common Kings, Jared Watson of Dirty Heads, Nanpa Basico, Mihali and Eric Swanson. And while each artist brings their own distinct sensibilities to the mix, all of the guest musicians are deeply aligned with the band’s mission of uplifting the masses.

For more than two decades, SOJA has elated audiences across the globe with their fresh yet timeless take on roots reggae, a sound born from their shared passion for making music that transports and inspires. The band was originally formed by a group of friends while still in middle school and has since built a massive, dedicated global fan base. In the years following, SOJA has headlined shows in over 30 countries around the world, generated 7 million social media fans and more than 1 billion streams.